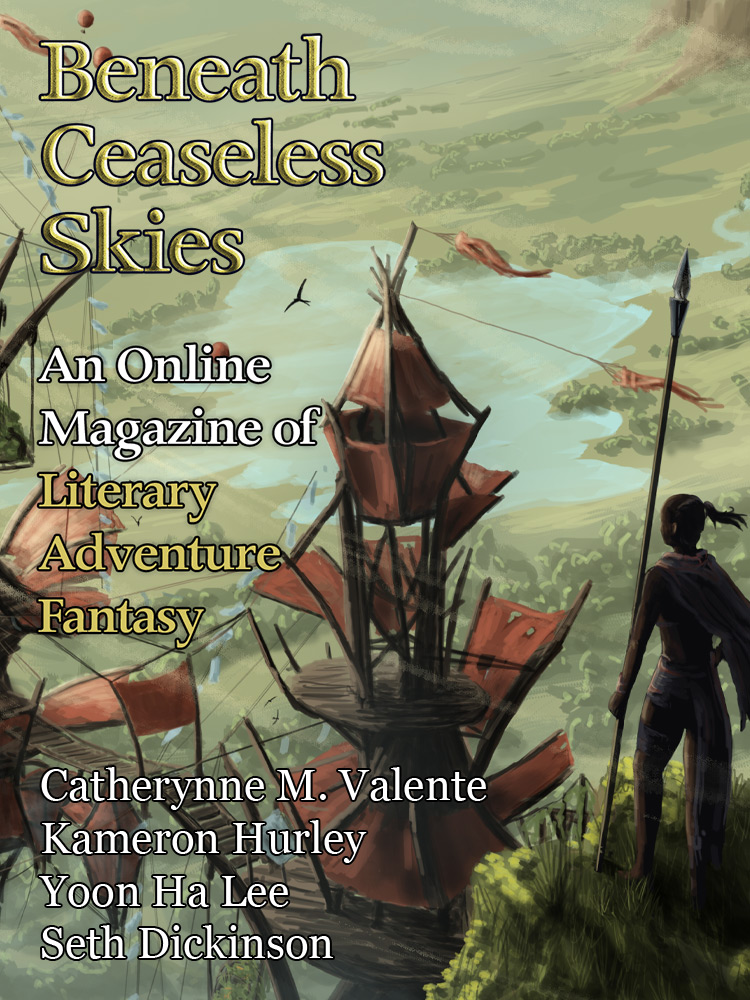 Yet another pretty BCS cover.

Almost a decade ago I was part of a terrific workshop run by Walter John Williams and Connie Willis in the Taos Ski Valley. It was a talented group, and the two week session was a happy blur of lots of writing, lots of critiquing, and lots and lots of shop talk, plus assorted movies and a lot of wine.

One of the participants mentioned that he planned to start a literary fantasy online magazine. Since he happened to like the stuff I was workshopping, I figured that would be a surefire sale. So as soon as he opened up the magazine, I fired off a submission.

And he rejected it, because he didn’t feel it had the right flavor for his magazine.

That’s one of the things I respect tremendously about that editor, who was of course, Scott Andrews. It was, in fact, not till the fourth or fifth submission that he took a story, which was a piece set in the same world in which the novel I’d workshopped at Taos, Tabat, in the form of “Love, Resurrected.” From day one, Scott had a strong vision for the magazine, and it’s been an inspiration to watch him implement it over the years.

Since then, I’ve sold a number of stories to Scott, and have always been terrifically happy with his edits. When the novel that I had workshopped at Taos finally came out, years later, I had a novelette set in the same world that he accepted, and he graciously worked with me in order to time its publication with the novel release date. Most recently, he published one of my Serendib stories as part of BCS’s Science Fantasy Month and as always the story emerged much the strong for his adept edits. A BCS acceptance — which I know to never take for granted — is always something I regard as one of a year’s accomplishments, overall.

I’ve also enjoyed reading stories by other people for the BCS podcast. Scott picks, at least in my opinion, pretty high-quality stuff, and it’s always a pleasure to read. In his meticulous attention to detail, he goes to lengths to make sure that all the pronunciations are exactly as the author intends, which is sometimes a difficult task in fantasy literature.

I always look forward to meeting up with Scott at conventions. I know that we’ll have long and thoughtful conversations that range all over the place, flavored by Scott’s gentle affability and sharp insight. I love BCS, because it is a splendid example of the sort of many-chambered edifice a truly talented person can build when they plunge themselves into a particular passion consistently over time. I wait to see what the coming years bring it. I cannot imagine it will be anything short of even more awesomeness as he continues to enrichen the fantasy landscape we all share.

Cat Rambo lives, writes, and teaches by the shores of an eagle-haunted lake in the Pacific Northwest. Her 200+ fiction publications include stories in Asimov's, Clarkesworld Magazine, and the magazine of Fantasy & Science Fiction. Her story, "Five Ways to Fall in Love on Planet Porcelain," from her collection Near + Far (Hydra House Books), was a 2012 Nebula nominee. Her editorship of Fantasy Magazine earned her a World Fantasy Award nomination in 2012. She is the current President of the Science Fiction and Fantasy Writers of America (SFWA). She is currently working on Exiles of Tabat, the third book of the Tabat Quartet. A new story collection, Neither Here Nor There, appears from Hydra House this fall.
View all posts by Cat →
This entry was posted in online fiction and tagged #sfwapro, beneath ceaseless skies, call and answer plant and harvest, primaflora's journey, rappacini's crow. Bookmark the permalink.